Where Did the Mess Begin? 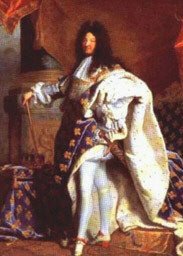 One week of camp counseling jr. boys featured the all time record for consecutive drinks spilled. I had a boy in my cabin who tumbled his beverage every meal time. I contemplated nailing his cup to the table and providing a straw. We so anticpated the next flood of kool-aid or milk that at the very moment the cup started its sideways trek, we were already aiming our napkins his direction. Understanding the mess related directly to knowing where it started. I recognize that anyone could say Satan or Adam, but I'm talking about who had the greatest impact on our own modern day mess. My candidate for years has been the French king, Louis XIV. And what would you expect from a king who wore silk stockings and pink satin pants (I couldn't resist that one)? This does not stem from Francophobia or some other psychological predisposition against things French.

Let me explain. Louis had one of the longest reigns of any monarch in history (70 years, 1643-1715). Louis believed in royal absolutism. He controlled everything in France with a well-organized bureaucracy, the word essentially originating with his totalitarian rule. Louis viewed religious freedom as a threat, so he required that all Protestants immediately become Roman Catholic. Since many Huguenots were productive and wealthy, he also demanded that all French Protestants stay in France except for clergy who would not convert. They alone could leave. All children must be baptized and then raised Catholic. The Catholicism of Louis was not compassionate. He erected the palace of Versailles and built the largest military in the world with money raised solely from the average Frenchman. The nobility paid no taxes. His religion made people miserable and without alternatives, in France the pendulum swang toward humanism.

The Age of Enlightenment began in France as a reaction to the empty ritualism of Louis's Catholicism, and spawned a movement to apply human philosophy to all areas of man's life in order to establish a new social order. The most influential of the Englightenment philosophers was Voltaire, who elevated the philosophy of rationalism, the idea that man's reason was the sole criterion for truth. He advocated revolutionary overthrow of traditional institutions and the establishment of a new order based on reason, science, and tolerance. Reacting to Voltaire was Rousseau, who developed romanticism, which exalted man's emotions and imaginations as a basis for truth. Voltaire and Rousseau denied Scripture and objective truth. Their philosophies hatched the German rationalism and dialectical materialism, which together formed Karl Marx and Adolf Hitler. The mass murders of tens of millions under either communist or fascist dictatorships come as a direct descendant of French philosophers created out of the false religion of Louis the XIV. His mess continues to haunt our world today.
Posted by Kent Brandenburg at 11:43 AM

Maybe they should call it the Endarkenment instead?

Like I've always said, never trust a man in heels.

I've got one thing to say to you guys, No comment.


At least he had the legs for the tights, :P