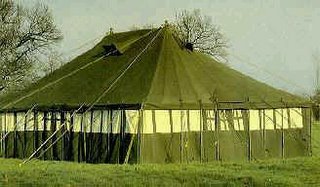 Paul made tents (Acts 18:3). We know from 1 Thessalonians 2 (2:9) that he worked night and day. We usually say "day and night." In Jewish culture, the day began at 6am. Paul rose while it was still night to do his day job and then kept working into the night fulfilling his purpose on earth. As a tent-maker, probably a trade his dad taught him as something to lean back on if everything else fell through, he supported his real work, making disciples. A tent making term made it into his epistles in 2 Timothy 2:15. There Paul wrote, "Study to shew thyself approved unto God, a workman that needeth not to be ashamed, rightly dividing the word of truth." When you look at that verse, which one seems to relate to his day job? "Workman" wouldn't be a bad guess. He probably thought of himself as one when he made tents, fitting very nicely with the words "rightly dividing." When Paul said "rightly dividing," he was using tentmaking terminology with which he was very familiar.

Making a tent required accurate cutting of the various pieces. To get each piece right, the tent maker must have understood the whole tent, so that he could cut out portions that would fit into the whole. A piece could be the right shape and still not fit into the tent because it wasn't rhe right size. Paralleling this with his approach to Scripture, the kind of study Paul had in mind would first get a thorough overview of the Bible at large. Knowledge of the whole Bible is labor intensive, the night and day kind of attitude that Paul had in his day job. After getting the big picture, then Paul could start slicing up the parts to fit the whole. When a piece of Scripture doesn't fit the whole, you know you don't have the right interpretation.

What is the whole? The whole tent would include the internal, immediate before and after, the chapter, the book, and then the entire Bible. Scripture isn't powerful like a divining rod that can be waved like a Buddhist monk attempting to ward off evil spirits. The message of God's Word works powerfully in its context. Romans 10:17 says that faith comes by hearing and hearing by the Word of God. "Word" there is the Greek word rhema. Rhema is not the Greek term for all of the Bible. Rhema speaks of a portion of the Word of God, a piece of God's Word that deals with a particular point of doctrine and practice, seen within an appropriate conception of its context. Our faith doesn't come from some marathon endurance record in chapter reading, the more we read the more faith we have, like filling up a gas tank. Our faith comes from seeing passages in their context and understanding them as the Lord intended. That takes work, sort of like what a tent maker might do.
Posted by Kent Brandenburg at 9:05 AM

Excellent post. I preached expositionally through 1 & 2 Timothy a while and uncovered the "rightly dividing" term as applicable to tent-making. However, I did not stop to consider this analogy you have made. It seems so simple now that you mention it.

Kent, I have heard this comparison before but you flesh it out very well. Would you mind if I used it sometime as one of my Daily Devotionals? It gets the point across very well, much better than I could do so.

Feel free Jerry, and thanks.