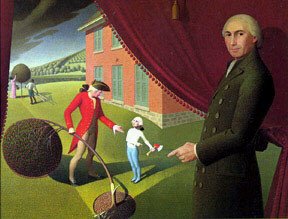 For some of my dear readers, you have already donned your powdered wigs and wooden teeth to celebrate President's Day. What a day it is for all of us as we remember our presidents. You are remembering your presidents, aren't you? Well, you do know what George Washington said when his dad caught him cutting down the cherry tree. He said, "Father, I cannot tell a lie, maybe I did or maybe I didn't." I say that in the spirit of some presidents, just putting my own spin on the story. We are a little bit lighter today for you dear readers. Hello, ello, ello, ello, lo, lo, o. There are readers in here, aren't there, there, ere, ere, ere? Which reminds me of another famous tree. You know---the one that fell down in the forest, but since no one heard it, it didn't make a noise. It is a new perspective on a time-honored philosophical question. If no one reads a blog, did it make a noise?

Keeping on topic, do you have a favorite president? The favorite president test must pass the first thought test. Which president first entered your mind when you were asked that question?I'm cynical of all Calvin Coolidge fans, even though I won the writing contest in my 8th grade class for Great American's Day. I do have a favorite Calvin Coolidge story, however. Here it is. Calvin Coolidge got home from church one Sunday carrying a big fat Bible. Oooops, excuse me, wrong president, that was Bill Clinton. No, Coolidge got home from church and his wife asked him what the minister preached about. He replied, "Sin." She asked, "What about it?" He answered, "Against it." That will tell you a little bit about quiet Calvin.

You can say that you truly like George Washington or Abraham Lincoln first. That's OK, even though it's not going to earn you any special presidential praise. Some party loyalists will say John F. Kennedy or Ronald Reagan or Richard Nix. . . . let's not get carried away. My first thought grid feeds me the name "Andrew Jackson." And you know why I think of Andrew Jackson? The Trail of Tears. I have to say the relatively unknown and controversial to produce readership. Not at all. Granted, that was perhaps a low point in the Jackson presidency. Just as an aside. Did you know its hard not to think of Andrew Johnson when I think of Andrew Jackson? Andrew Johnson was the first president impeached. And the second was . . . . Uh-huh. They both stayed in office, the first by only one vote in the Senate. But no, not because of the Trail of Tears. Jackson was a Southerner. That is one strike against him for most United States citizens, especially in the red states. And the two significant thoughts that come to my mind with Jackson are: (1) He wouldn't significantly lower the tariffs to aid southern farming. He knew the importance of tariffs to protect northern manufacturing. As a result, his Vice President, the popular John C. Calhoun of South Carolina, resigned. The tariffs were a burden to the cotton trade of the South. (2) He distrusted the national bank. In one amazing act, Jackson removed all government funds from the national bank to punish its continued unjust practices, despite damage this did to the national economy. People seemed to either love him or hate him, and on many occasions just misunderestimate him, but perhaps that's someone else I was thinking of.
Posted by Kent Brandenburg at 10:24 PM

Favorite President was the Teddy Bear :0). Seriously though His hardwork, gruff spirit, strong integrity, fearless leadership, sending out the great white and all

my favorite president was F.D.R.

We have built quite a new memorial to F.D.R. in Washington, DC, equipped with his scottish terrier. I enjoyed the long walk around the Tidal Basin from F. D. R. to Thomas Jefferson, noticing a turtle swimming close to shore. You can't google. Two questions. Our first commentator said, Teddy Roosevelt, so was or wasn't, and if was, then how was Teddy exactly related to F.? Number two, What was the name of the canine of the man in the wheelchair? Smiles.

Ok I missed the canine one, 50% not to be since it has been at least 10 years since I opened a history book.

Do you think FDR social reforms were secondary to his physical condition?

FDR was no one until he married Eleanor. Then he took advantage of depression that Hoover was no cause. The depression was caused by essentially three things: 1) New consumer credit, new practice of buying on debt; 2) Massive purchasing due to new mass advertising; 3) Once people were maxed out with their credit, people stopped buying things, factories stopped making them, people lost their jobs, people couldn't repay their loans, etc. FDR offered redistributed wealth, creating jobs with government programs. Hoover's plan was slower, but would have involved private enterprise and charity. People weren't patient enough to wait for that. He offered them a New Deal and they took it. We are still paying for that deal.