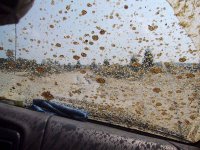 After a good number of years of working with people, I happen to know that "I didn't understand," "I don't get it," "It wasn't clear," or "I don't get what you're saying" do not necessarily mean what they say. Often, they are excuses. They are difficult to judge, however. How do you know if they don't know? Really. Perhaps you know. I can't afford to believe these kinds of statements every time my children use them. I often say, "You should have listened more carefully then, I guess." The "I guess" part is the tough man portion of the statement, ending with a bit of irony, usually lost on them.

It shouldn't surprise if this is the number one excuse people make about the Bible or anything having to do with God---'since its all unclear, I can't be responsible for having to do it.' They treat the Bible like the windshield of a four wheeler after a few hours in the mud. Just today I had someone tell me that there were, quote, "500 Bibles." I have a certain look I give when someone says something off-the-wall, a sort of eye squinty kind of thing combined with a feint smile. I held that look for a moment, and then proceeded to tell him there was only one. I admit that I get fed up with hearing that type of lie repeated. We have more copies of Scripture than any other book from antiquity. When we compare the copies, we find them essentially the same. This same guy goes on, and gives me really an inane illustration. He says, "It's like if one person says something in someone's ear and then it is repeated to ten people, by the time it even gets to ten people, it is changed." That kind of analogy works for someone who doesn't want any kind of trustworthy Divine authority. He can base his decisions on his feelings, thinking that in the end, he'll just tell God that He wasn't clear, and God will say, "Yeah, you're right." Sorry pal.

The Bible teaches the perspecuity of Scripture, its clarity. In more than one place God's Word refers to itself under the figure of a lamp or a light. The power of Scripture is to illuminate or enlighten men. "The commandment of the Lord is pure, enlightening the eyes," Ps. 19:8. "Thy word is a lamp unto my feet, and a light unto my path," Ps. 119:105. "For the commandment is a lamp; and the law is light," Prov.6:23. Moses says to the children of Israel in Deut. 30:11, "For this commandment which I command thee this day, it is not hidden from thee, neither is it far off." II Peter 1:19 describes Scripture as "a light that shineth in a dark place." 2 Timothy 3:15-17 says that from a child Timothy had known the holy scriptures that were able to make him wise unto salvation, and that Scripture thoroughly furnishes the man of God unto every good work. Jesus frequently calls people, including his disciples, "foolish," "slow of heart," "blind" when they don’t understand the Scriptures (Lk 24:25-26; Mt 22:29). The presupposition of clarity is further evident in attempts by Biblical authors to communicate clearly (Deut 6:4–9, Matt 24:15, Rom 6:19a, 2 Cor 1:13), calls to hear and obey which render the readers responsible (Deut 31:9–13, Deut 29:29, John 5:39–40, Col 3:16, 1 Tim 4:13, 1 Pet 1:22–2:3) and affirmations of Scripture’s utility (Ps 19:7–11, 1 Cor 10:1–11, Rom 4:22–25, 2 Tim 3:14–17, Rom 15:4). In James 1:18, God is called the Father of lights, a strange name to give Someone Who is unclear. Unclear greatly offends One Who has an infinite capacity to be understood, even placing ourselves as judges of His clarity. It also reflects on our low view of His justice, when we could infer that He would punish people for something they could not have been required to know.

The Lord's perspecuity is not where the blame lies. Lack of understanding is attributed to rebellion against God, which includes a moral and an intellectual dimension (Isa 44:18). Those who cannot understand are described as unspiritual (1 Cor 2:10–14), outside God’s kingdom and under judgment (Isaiah 6, Mark 4:10–12), perishing and controlled by Satan (2 Cor 4:3–4), ignorant and unstable (2 Pet 3:16). This last verse is important, for it occurs in the context of Peter’s ‘clear’ reading of Paul. Some aspects of Paul, while ‘difficult to understand,' are nevertheless understandable. The fault is not with Scripture, but with the ignorant and unstable readers. Yet, there is a renewed humanity, to whom the clear Scripture speaks. When God’s Spirit renews these rebels (Jer 31:34, 1 John 2:26–27), the veil is removed and Scripture can be understood (e.g. Acts 17:10–12, 2 Cor 3:12–18). It isn't the seed, but the condition of the soil (Mt. 13).

All clear now?
Posted by Kent Brandenburg at 9:11 PM

You have got to use your 'some-one-saying-something-off-the-wall-look.' as a picture for this post. I think that would be priceless. Thanks for the post.

I agree with the previous comment. Just make sure you increase the megapixels.

Are those steroids? Megapixels? I'm not a user, so, well.

This excellent post seems perspicuous engough (now that's a word that doesn't come up in conversation often). What book would you recommend on the subject of the clarity of Scripture?

Hi Jeff. Thanks for the comment. I wandered to your site and enjoyed your ad hominem presentation. A book on this subject? I've never seen one. If there is, it is old. A Short book on it might be good.

It really hit me while I was reading your post and Scripture you collated that it is a subject worthy of special attention. When you get the book written, let me know--I want one.