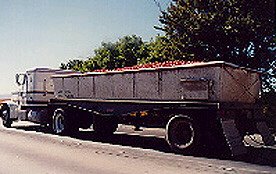 California is a big, long state with lots of stuff in it---mountains, ocean, lakes, rivers, hills, snow, desert, forests, cows, sheep, elk, bear, and farmland. If you drive down the middle of the state, you travel through the San Joaquin valley where a tremendous amount of produce is farmed. In that area, you will see gigantic fields of tomatoes. I want you to know that I am amazed by fields of tomatoes. On the crossroads off the interstate, these little two lane state highways, you will see lots of trucks pulling trailers heaping full of tomatoes, bringing the produce to the next stage before paste, sauce, soup, and the grocery store. When you drive behind them, often individual tomatoes will fall out. I love tomatoes. I hate seeing them hop out, going to waste. I want to stop my car, get out, and pick each one of them up. The truck keeps rumbling along as if it doesn't matter. They don't care if they lose even more than a few.

Unfortunately, some treat either the Words or the Truths of Scripture this way. With the Words, they don't care if we lose a few of those as along as the doctrine doesn't change. With the Truths, they don't mind sacrificing a few of the doctrines or practices as long as people can get along or even just enjoy themselves. Churches and professing Christians continue to allow the Words and the Truths to hop out of the truck, and then keep moving their merry way as if it didn't really matter as long as they keep most of them. This is not what the Bible teaches. All Scripture is profitable, man lives by every Word that proceeds from the mouth of God, and we will be judged by His Words. No one, including God, told us that we could "prioritize" out certain truths. Scripture shows no examples of anyone doing so, at least without suffering for it. This kind of loosy-goosy treatment of God's Word, no better than tomatoes off a tomato truck, is how we got infant baptism from adult and sprinkling instead of immersion. It is how we went from the elements as a symbol to their becoming the actual body and blood of Christ. Not only shouldn't we, but we can't afford to lose Truths. We shouldn't stand for it. And know this: the Truth is more important than tomatoes. Who would have thought we'd even have to say?
Posted by Kent Brandenburg at 12:47 PM

Truth is more important than tomatoes! It seems that people get upset about a pickle in a cheeseburger or the lack thereof, than they are when some Bible doctrine is misrepresented. Thanks for blogging.