AN EARLY FUNDAMENTALIST of science 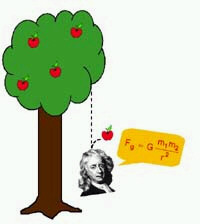 You can start laughing right now. I wanted to get you warmed up for my statement: You have a computer because of the Bible. Al Gore wants to take credit for the internet, but I think Moses has more to do with it. Why? Let me give you the clifs notes version.

The state church, Roman Catholicism, held an iron grip over the dispensing of information in Europe for around 1200 years. People who were reading their Bibles were often running for their lives, not leaving them much time to think about much else besides fellowship with God and breathing. The God-derived curiosity in man spurred him to find more. He wasn't satisfied with the Catholic answers and solutions or the feudalistic, oppressive society that Romanism fostered. God preserved separatist churches who continued the legacy left by Christ and the Apostles. Those churches kept alive an alternative to the wholesale and wide ranging deceit of Satan. Social and physical conditions initiated by the crusades and then the Italian and Northern Renaissance, a rise in the middle class, the ability to make a living in some way without land ownership, all led to the moveable type printing press in 1440. The elephant was in the room. Now people could read the Bible in their own language. What they read had an amazing impact on their view of the world. They could get back to the fundamentals of God's will for man such as "subdue and have dominion over the earth" (Gen. 1:28).

From God's direct revelation, men saw foundational truths to enable them to obey God's command to subdue and have dominion. They began looking for the reasonable, orderly laws that represented God's creation and sustaining on the earth and in the universe. One early fundamentalist of science was Isaac Newton. Newton reached with his brilliant mind for an understanding of God's basic laws in the physical universe. In 1666 Newton observed an apple fall from a tree, and by imitating in his mind the divine simplicity by which God governs the universe, Newton reasoned that the force of gravity that brought that apple to the ground extends beyond the tallest apple tree even to the moon and beyond. In 1687 he published the Mathematical Principles of Natural Philosophy, in which he announced his knowledge of the universal law of gravitation. He also explained the three laws of motion. In 1704, he published Opticks, a book about the nature of light. For his achievements, he is remembered as the Father of Modern Science. With his mind opened by the Word of God, his studies led to the development of modern physics. We can trace all of our modern technology back to a few words penned by Moses under inspiration of God that were read by men like Isaac Newton, who in turn obeyed God to the betterment of all mankind.
Posted by Kent Brandenburg at 11:41 AM

Good article! Nearly ALL of the founders of what became known as science believed in God the Creator. Copernicus, Galileo, Kepler...

Sir Francis Bacon wasn't a scientist but wrote descriptions of what came to be known as the scientific method. He clearly believed that God created everything in six days and left it at that, never hinting that science could, or should try, to derive answers to how things came to be in the remote past.

Michael Faraday, one of the great pioneers in studying electricity, held Christian views that today would be labeled "fundamentalist"!

Matthew Maury was inspired by a Bible verse to look for "the paths in the sea" and founded oceanography with his studies of currents.

In the 20th century, G.W. Carver testified that he asked the Creator to show him what could be done with the peanut. (No, not peanut butter, many different things!)

Dr. Joseph Mastropaolo's physical training regimen contributed to the flights of the first human-powered aircraft to win the Kremer prize and cross the English Channel.

Dr. Raymond Damadian was a key pioneer in MRI, although the Left-leaning Nobel Prize committee snubbed him.

There are many active young-Earth Creationists practicing and teaching science today!

Thanks the Old Dreamer!