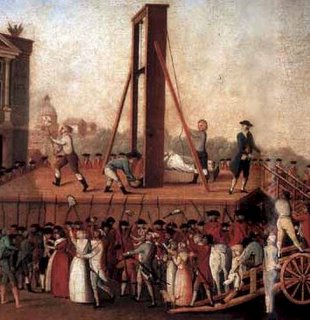 How tall was Louis the XVI when he died? I estimate around four feet. He may have been the shortest monarch in history at his death, well, because of how he died. You know, the guillotine. Louis ignored the poor. His dad had; grandfather too. Remember Louix XIV who funded his big buildings and foolish war efforts by taxing only the poor? His nobility buddies played and frolicked. The son, XV, said these last words, "Apres moi le deluge," "After me, the deluge." He was right. When the poor outnumber everyone else, bad news for most places, and especially a France now immersed in secularism. Louis XVI got shortened because, ironically, the Committee of Public Safety preyed on the poor's bloodthirst for revenge, lifting Maximilian Robespierre to power. Without true faith and drenched in the rationalism of Voltaire and Rousseau, nothing could hold them back from what they and Robespierre wanted.

Stepping to power on the desperation of the poor is very old. Roman emporers quelled their poor by giving them lionfests at the Coliseum along with bread and circuses. Mussolini found his totalitarian place in Italy because he could make the trains run on time. Hitler found his niche in bitterness over the Treaty of Versailles. The poor were willing to give the madman power with all the right promises of revenge and domination. The same event could have occurred 400 years earlier in Germany during the peasants revolt, but the Bible prevented the anarchy characterizing the French revolution. The poor expected changes when the Protestants replaced the Catholic state church. Scriptural training stymies mass murder, however.

We jump forward again to post Civil War after Lincoln's assassination resulted in a very strict Southern reconstruction. This greatly harmed the emancipated slaves. They were some kind of revolution waiting for a time to happen, but there was Booker T. Washington. Instead of feeding their discontent, he empowered them by instructing them to build a better brick, and they did. They built the entire Tuskegee Institute with bricks they made in a kiln they constructed. He taught them every Sunday night after a return from church services in the character of hard work, self-discipline, and trust in the Lord. So what happened? It was far easier to lis

ten to the doctrine of W. E. B. Dubois, the founder of the NAACP, who preyed on the poor blacks with his message of bitterness and government intervention. When Booker T. died in his early fifties at the turn of the 19th century, Dubois was there to fill that vacuum of leadership with his philosophies of self-gratification. His words became the new heritage even until after his death in Ghana in the 1950s after publically espousing communism and emigrating there.

The Democratic Party has kept its power by exploiting the black, white, and elderly poor, trading self-sufficiency and real liberty for the stagnation and slavery of government dependence. With any kind of success in actually delivering their constitutents from their poor circumstances, the Democratic Party would lose their primary wedge for maintaining the votes for election victories, guaranteeing policies of continued failure for those of whom they take advantage. Churches have unfortunately realized these same strategies and cobble numerical success from promotion and marketing to those who covet their allure. None of this promotes Scriptural character or fleshes out a Biblical way of life that will advance a culture. It all continues to prey for power.
Posted by Kent Brandenburg at 12:11 PM

I thought I understood this post until I got to the last three sentences. Right now, I don't see the connection. Maybe you could do another post where those three sentences were the main three paragraphs?

Maybe I don't get around enough to know what you're talking about. Or maybe I'm in it so thick, I can't see the forest?

When I started that post, I wasn't envisioning making that application. I had a sort of stream of history in my mind and that's how it turned out. I knew that was the most controversial sentence. It could be Hybels. It could be Hyles. It could be Texas Bob Gray. It's not as though I haven't been in a similar forest. I like to call it a barrel. When everything looks like the inside of a barrel, it's hard to see certain things. It's probably a better email conversation between you and me, just out of respect for your leadership in your church. Thanks for your response.

The common denominator I see is oppression from men that are in power, rather it be emotional, financial, or spiritual. Leadership has an awesome responsible not to oppress their people, but help them grow to be better people, IMHO