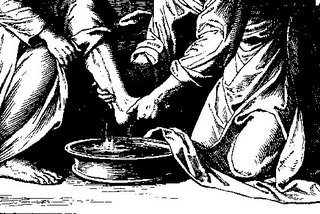 My friends and I got a kick out of the titles to Walter Kaiser's books, often beginning with the word "Toward..." We would joke like this: "Toward a Passing Grade in this Class" by Kent Brandenburg. A one page essay could be "toward" anything. For that matter, one sentence could travel "toward" any subject. OK, now that you are on the inside of that joke, I call this "About Mark." "About" is another preposition perhaps even more vague than "toward." I would vote Mark as the most underappreciated gospel of the four (I recognize that Bart Ehrman says there are hundreds of gospels, but this is long "after" any respect remains for what he writes). Matthew and John get most of the kudos with Luke as honorable mention. Mark made the very select team, however, so let's talk about his contribution.

Mark's gospel portrays Christ as servant. Like most faithful service is rendered in relative anonymity, the book of Mark itself gets the least bells and whistles. No more faithful servant lived on earth than Jesus Christ, Who perfectly submitted to the Father's will. Ironically, Mark himself is infamous for a lack of faithfulness. Mark is, after all, the John Mark that spontaneously quit on Paul and Barnabas during the second missionary journey (Acts 13). When Barnabas suggested his cousin Mark (Col. 4:10) for the second trip, Paul's refusal caused the break-up of this successful team. So with this as a resume, what's Mark doing writing a gospel? Mark wasn't faithful, but Jesus was and continued to be in Mark's life until Paul said 'bring him along; he's useful to me' (2 Timothy 4:11). Peter himself didn't write a gospel of Christ, but his spiritual son did (1 Peter 5:13), faithfully penning everything that Peter himself would have likely written. Mark's mom's house could have been the upper room and for sure was the place where Peter headed after God saved him from prison. Who knows? Maybe little Rhoda was a younger sister. Peter never made it to Rome, but Mark did and his gospel tells the story of His Savior to a Roman audience with a Gentile perspective. And he wrote this to all of us: "Go ye into all the world and preach the gospel to every creature" (Mk. 16:15)---a command he himself at one time failed to obey, but not again that we know of. Not Mark. What 'about' you?
Posted by Kent Brandenburg at 3:35 PM

I love the new photo. Watch out for the ROUSs.

Mark gave all of us a very vivid and detailed prospective of the crucification of our Lord;Mark also gives us great detail about the miracles of Jesus. He portrays our Savior as a servant of the Lord ;thus the Great Commission . We will never know why he did not finish his mission with Paul but turned back at Perga but went with Barnabas to Cyprus. We do know that Peter refered to Mark as "my son"(1Peter5:13) and was later sent for by Paul (2Timothy 4:11) prior to his execution. Mark definately points to Jesus as the "servant of God the Father"
Perhaps Mark was like so many of us. Knowing the proper thing to do doesn't always come easy, but continuing to follow Christ worked out just great for Mark..
Will it for everyone of us? Only we can answer that question right now. But, when that great "book" is opened whose name will be there?
Great post Pastor B.
ILA

Pastor Brandenburg,
Thanks for visiting The Female Fundamentalist. MAYBE, Heather and I will get back to work on it this summer. Life is busy.

Thanks for the perspective on John Mark. God is faithful!