The Trip to Europe Continued (Twenty-Fifth Post In Total)

The Allies landed on the beaches of Normandy in an invasion of Europe on June 6, 1944.  This week marked the 75th anniversary of D-Day, the beginning of the end for the Axis powers in Europe.   Less than a year earlier, on June 20, 2018, Tuesday, I left our apartment in Mountrouge and walked to a car rental business, a Europcar that was in the basement of a parking garage in the Jules-Noël Sports Center there.  Car rental and driving was a greater adventure in England, but France presented its own challenges.

I picked up the car that morning right when the car rental opened and drove it to the front of the apartment to pick up the family and began our drive to the American Cemetery at Normandy.  Almost all of the trip was on a toll road that looked similar to an American one.  I found it hard to gauge the speed limit on these freeways.  The tolls are paid mostly with coinage and sometime a window with a person in it, who does not understand English.  If you are ever making that trip, you better get the proper coinage figured out to put into the machine.  Some of them will take credit cards, but I also found that the credit card wouldn't work on some of these.  The French are not, I repeat not, in general sympathetic to Americans.  Maybe it's everybody they don't like, but one can get the distinct impression that they do not like Americans.

As multicultural as the United States. as leftist as it is in France, France isn't multicultural.  The French like their language and and their culture.  I don't like a lot about it, but it is a culture that the French have, a unique one.  I'm reporting only what I saw.  I'll write more about it.  I don't think I went into it with a bias toward the French.  When we visited the church on Sunday morning, I was blessed to see what I believed to be true conversions and a genuine evangelistic effort there.

It was about a three hour trip by car from Montrouge to the cemetery.  If I was going to compare the northern coast of France to anything that I knew in the United States, it would be closer to parts of the East coast of the Middle Atlantic states than the West coast.  With the time that we had to get there and back in one day, we decided to do two things.  We would visit the American Cemetery and then Omaha Beach, which is right underneath the cemetery, down the bluff.

There is a lot of parking at the cemetery, but there aren't normally a lot of people there to visit, because it's an American cemetery in France.  Mostly people visit from the United States, and it isn't easy to get there.  There are also lots of places to tour around Normandy, several museums and various cemeteries.  Someone could spend weeks there just looking at D-Day related sites.  I can tell you only about the two sites we saw.

We walked first to the cemetery building, which was the museum.  The museum gives an excellent presentation of what happened on D-Day.  It is very well organized to put the events in chronological order.   At the end is a small theater with a very well done film that is very emotional.  I cried all through the museum. 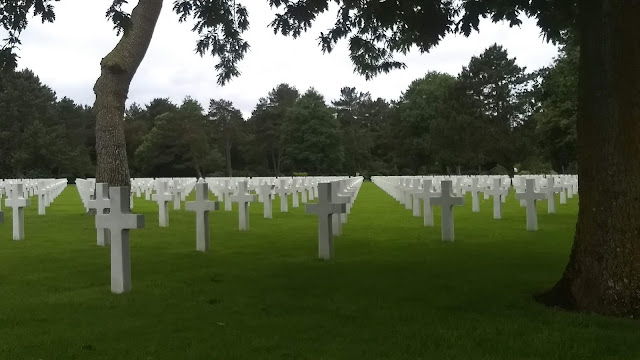 When we left the museum, we walked out to the cemetery, which is kept in immaculate condition.  There are grave stones mostly in the form of crosses, made out of a unique marble.  The rows are so, so straight.  The order and symmetry in themselves, green fields filled with white crosses, moves.  We caught up with a tour that starts with a large map that overlooks the beach below and out onto the English channel.  You can imagine everything from that vantage point.  Then we walked to the variious memorials there and our tour guide, a French woman, who spoke excellent English with an a French accent, talked at every point.  She stopped at certain crosses and told stories about the one whose body rests there.  Tears continued to run with her talk and the sites all around us. 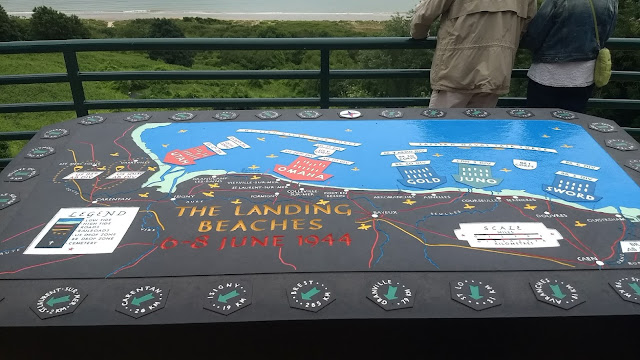 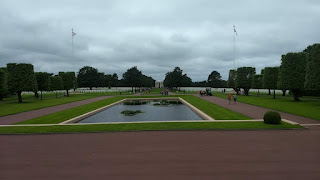 We went back to our car and drove down to the beach and parked there.  There is a memorial on Omaha beach.  There are some symbolic metal objects there.  Besides that, it's just a beach.  It's like someone talking about ground where some major event occurred.  The ground itself is hallowed by the men who died there.  That's the feeling I had even though it was an ordinary beach. 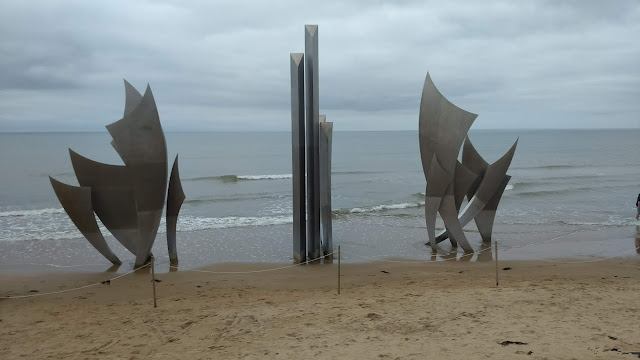 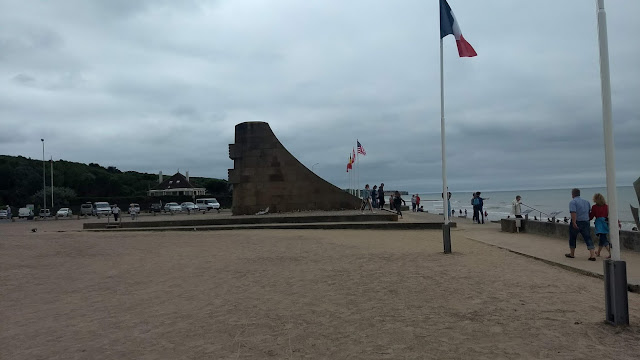 We drove the three hours back and I was able to drop off my family and return the rental car that evening, then walk back to our apartment.  We ate that night at the restaurant on the first floor.  The next day we would visit the Palace of Versailles and the Eiffel Tower.
Posted by Kent Brandenburg at 10:40 PM