The Trip to Europe Continued (Eighteenth Post In Total)

On June 13, 2018, my wife, two youngest daughters, and I arose and walked the 7 or 8 minutes to the Mestre, Italy train station to catch ours to Rome.  We left around 9am for about a 1pm arrival.  We got back to our house fairly early the night before and our train wasn't leaving that early.   We could look out the window to see what Italy offered by train between Venice and Rome.   The route moves through Tuscany, which is considered one of the most beautiful areas in Italy.

Tuscany was nice, but for what I saw from the train, it looked a bit like parts of California that are equally beautiful.  I live about 30 minutes from Napa Valley, which has a similar terrain, maybe even nicer in certain ways.  Of course, we were on a train, which limits what you can see.   We saw it -- nothing outstanding.  The train went right through Florence.  If we would could have stopped there and spent a day, I'd have more to write here.

Rome doesn't have a great public transportation system, compared to London, Venice, and later Paris.  We didn't have many options to get to our room.  We got off at Roma Termini and had to figure out the public transportation system.  We live in a metropolitan area, so catching busses and trains is normal to us, but Europe is different and every big city in Europe is different, especially in different countries.  We took a bus that let us out still pretty far to walk with our luggage on narrow, rugged walkways and heavy traffic.

I know you can tell this by looking at a map, but Rome is an entirely different area in Italy.  The area is much different than Northern Italy, as are the people.  The people from both places will tell you that.  It's similar in that way to the United States in the sense that you've got regions with a lot of variation, even in the same state.  California is vastly different both in people and topography in various regions.

What sticks out in Rome right away is that you are in a major metropolitan area, but you are also in an amazing historical and archaeological location.  It's both.  There isn't anything like that in the United States.  I have never been to anywhere in the world like that.  I would think Athens is and perhaps a few more locations such as that.  We stayed in an apartment on the eighth floor about a thirty minute walk from the Coliseum.  We had to wait for our hostess to arrive.  Rome was warm, so we found a little shade and waited.  While we did, one of my daughters and I fond the nearest grocery store to get a few things we knew we'd need while we were in Rome.  There they also did not know English.  You can do enough to do business and it gives you sympathy for people in the United States who don't know your language.  Italy is not a third world country.  You can get what you want or need there.

Only three people could go up in the little old school elevator, so I waited with a daughter downstairs for it to go up and down.  The hostess, who was a native of Rome, gave us some tips, showed us everything, and left.  We got settled in and freshened up.

Something I haven't mentioned was that in two different places we took the key with us and had to send it back.  The first was the very first place we stayed and we sent it right away in London.  It worked out fine.  I will say that we also sent some postcards from London back to the United States, one of which arrived three months later.  Disappointing.

Mailing the key was an adventure.  I found a post office about three blocks away and went in and asked if I could get an envelope and send the keys.  He didn't know English.  He was able barely to explain that I needed to get my own envelope.  I tried about three different places, and one of them said the tobacco shop.  The tobacco shop.  If you grow up like I did, you don't go into a tobacco shop.  However, in Italy the tobacco shop is the Italian version of a convenience store and it is the place you get your public transportation tickets.  That was good to find out almost right away.  They're all over the place.  They had the envelope I would need, so I went back to the post office, addressed the envelope to the Venice host's parents,  and finally it all worked.  He got the key over a week later.

Our goal for the late afternoon and evening was to go to the heart of Rome and go on a walk starting at Campo de Fiori.  First, we would eat in the late afternoon.  I can't remember the name of the restaurant, although I could look it up.  It was one little room with very cramped small wooden tables.  We liked it. It was a good start to the food of Rome for us.  It was near the famous statue Pasquino, which is along the walk, and we would get started once we were finished eating. 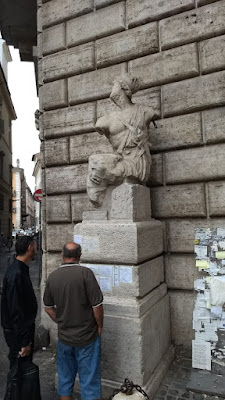 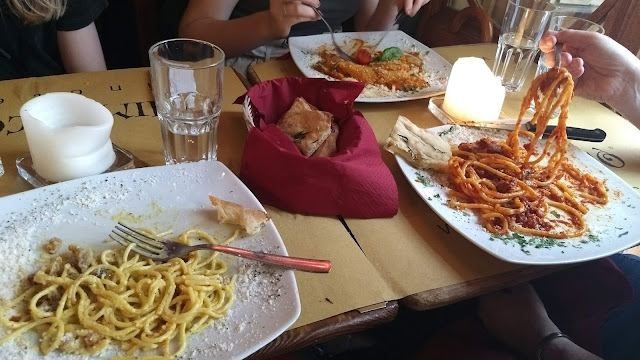 I'll return next week, Lord-willing, to describe that night and the next .  At some other time in some other post, I'll talk about mid-week services this week and the next.  We went the first and second midweek in London and Ripon.  It wasn't too hard to find a place to attend in England, even if we had to go a little bit out of our way.  We were glad to do it.  It's a major part of our trip.  We decided in advance before our trip, not because of time, but because we decided we could not do better than meeting on our own, something I would have never done until a few years ago.  I'm convinced in rare instances, it's the best thing to do.
Posted by Kent Brandenburg at 11:25 PM