The Trip to Europe Continued (Seventeenth Post In Total)

Venice has a permanent population of 55,000 and 20 million visitors a year.  At most moments, far more tourists dwell there than permanent inhabitants. It's not really built for the number of people who are normally there.  I'm glad to say we missed the high point.  There were crowds, but it didn't seem that cramped on June 11 and 12, Monday and Tuesday, 2018.  For as many people as there were there and in some locations, especially San Marcos square, you can still find an entirely empty walkway or even piazza, even feel all alone.  I understand those who say that every corner you turn in Venice is another surprise.  Nothing is normal there. 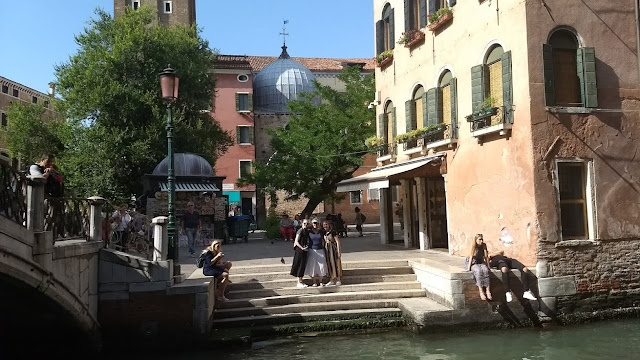 It was impossible to get up to speed on every place we went on this trip ahead of time.  It was enough, really, to plan it and pull it off.  I did reading, one travel book and a few essays.  Something you can do, so as perhaps not to stress about this before your trip, is to understand that you can read about the place you visited afterwards.  Get up to speed later.  You can savor your trip then.

Everywhere you look in Venice, at least for me, you want to know more.  There are too many things to look at to know everything that you're seeing.  For a day and a half, essentially we just enjoyed Venice.  Our host was Venetian.  He knew a lot from a Venetian perspective, but even so we couldn't learn it all. 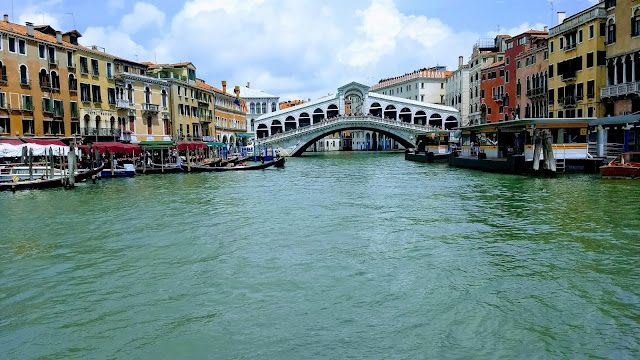 Venice is full of art.  It was our first major art experience on the trip.  When it comes to art, I still don't know most of what I'm seeing, and what it means.  It's usually religious though, Roman Catholic, from the same era, old, done by very skilled painters and sculptors.

On Tuesday, June 12, we rose late after the early a.m. arrival the night before.  We replayed the previous day's travel:  train, vaporetto down the grand canal, except exited a few piers early to walk a short cut to St. Mark's Basilica in San Marcos square.  We had prepaid tickets.  We missed a long, long line with a very busy square. 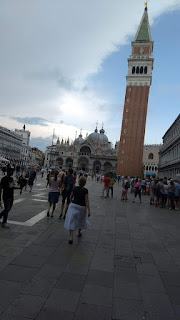 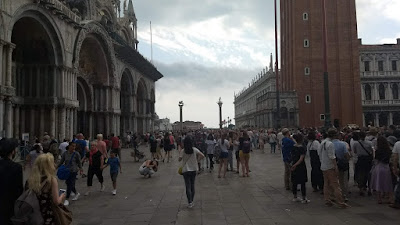 In the U.K. we toured several cathedrals.  We added two more in Italy.  St Mark's was laid out like everything else.  It seemed like something to visit.  It's number one on most lists, but I didn't have a good impression.  It was dark, hot, and crowded.  There was really little to see.  We didn't stay long.  It was sort of, been there, done that.  We decided not to attempt to go up the tower, and just make our way back to the train, slowly walking Venice.

Part of what you do in Italy again and again, which we did, is gelato.  We had already done it the night before and did it at least twice more.  I say the best you can do in Venice is slow walk through it.  Eat little food items.  Buy something.  Sit, watching a great scene, while eating gelato. 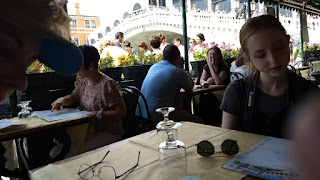 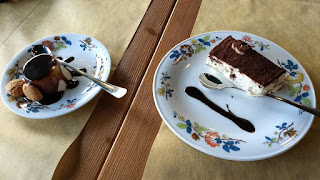 Nothing is like the Italian coffee experience.  The U.K. had its tea.  Starbucks founder learned coffee from Italy, but Italian coffee is still its own thing.  Part of it is the service, which brings an experience.  We sat at a restaurant right next to the Grand Canal and the Rialto Bridge.  We went with sharing four different desserts and then coffee.  This is the way to make your way through Venice.

We decided to leave Venice in time to go into Mestre to an Italian restaurant owned by a friend of our host.  We ate outdoors traditional Italian pasta and it was terrific.  We got home at a good hour for a regular night sleep.  We would be leaving between 8 and 9 a.m. the next morning by train to Rome.
Posted by Kent Brandenburg at 3:46 PM