An Apology for Anger 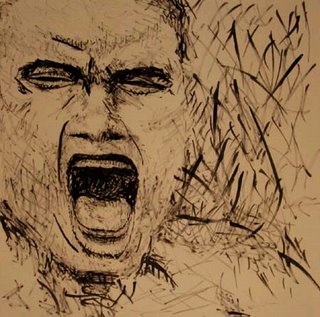 I'd like to apologize for my anger. Well, I mean that in the way of an apology for anger, a defense of Scriptural anger. A few years ago, William Bennett, former Secretary of Education and National Drug Czar, authored his book, The Death of Outrage. He wrote it mainly in response to the Clinton shenannigans. Do you think he had a point? Did we, do we, need more outrage? James 1:20 says: "For the wrath of man worketh not the righteousness of God." There we go. Now it's settled, the wrath of man is always wrong. Have a good day.

Wait a second, may as well look at the context of James 1:20. First, vv. 18, 19: "18 Of his own will begat he us with the word of truth, that we should be a kind of firstfruits of his creatures. 19 Wherefore, my beloved brethren, let every man be swift to hear, slow to speak, slow to wrath." When someone speaks or preaches the Word of God, saved people are commanded to listen, and not to argue or get angry with what is spoken or preached. Man's anger towards preaching will not work the righteousness of God. Instead of getting angry, what should he do? See v. 21: "Wherefore lay apart all filthiness and superfluity of naughtiness, and receive with meekness the engrafted word, which is able to save your souls." Rather than get angry, he should get right.

If anger doesn't ever work the righteousness of God, it would seem strange that Paul would write: "Be ye angry, and sin not" (Ephesians 4:26). What do you think of this verse? "And the Spirit of God came upon Saul when he heard those tidings, and his anger was kindled greatly" (1 Samuel 11:6). Obviously, God wants us to get angry at times. God Himself gets angry rather frequently. Our anger should reflect God's, a kind of directed anger, which serves a particular purpose. It shouldn't be an out-of-control, selfish anger, but one that declares our displeasure with a sinful activity, either our own or someone else's. I'm done apologizing.

Posted by Kent Brandenburg at 6:23 PM

Hmm, Seems like I heard a message talking about that recently. Some good thoughts though. I believe that there is a time and place to be angry. What is the point of our anger. Is it for our own vindication or God's? Jesus got angry when He drove out the money changers. Great article.

It always makes me mad when people tell me I can't get angry.

Pastor B.....I would say if God doesnt anger at His people today for their neglect and misuse of the name of Christanity...He may well owe Sodom and Gomorrah an apology..if you will! It's past time Christian people band togeather and become angry for the abuse of the name of Christ and people who call themselves His followers! Angry is a term...the feeling is an action.
Pray hard; Follow the rules; Defend what you believe is doctrinaly sound!!

It makes me mad when people tell me I can't get angry. Actually, there are times when it is a sin to not get angry.

You have made a good point here. Being angry is not a sin. You stated, "Our anger should reflect God's, a kind of directed anger, which serves a particular purpose" This is true also but to what purpose should it be? Many IFB churches focus on the anger on the person and not the problem or the sinner and not the sin.
Which brings the point, in which direction should the "directed anger" be directed? The sinner or the sin?
The sin should be the focus of the anger rather than the sinner.

Hogwash. Your explanation of that verse is hogwash.