Is That a Chihuahua? 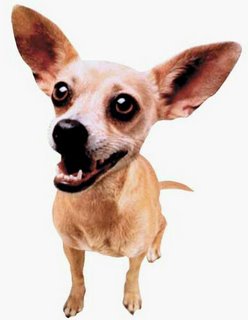 Genuine vinyl? How many naugas did you have to kill for that naugahyde? I heard about a man who bought what looked like a real Polo shirt in Hong Kong at an amazingly low price, and after one washing, the horse turned into a chihuahua. Fakes. After all is said and done, no one will fool God (see Psalm 139). We can't flee Him, fight Him, or fake Him. He already knows.

Are the biggest fakes in churches with lists of standards? That's what many would like you to think. They would like you to believe that people in those churches keep all these regulations to impress people. After all, that would be why they would keep them, or why they did that. No, the biggest con men are those who call themselves Christians and have relinquished most of their standards. They want you to believe they are more spiritual because they either dance, go to movies, rap, rock, wear the short-shorts, or party. After all, "they're not perfect; they're forgiven." They act and look like the world, but still have the Christian moniker. Their claim to fame: they aren't trying to fool people like all these "fundamentalists" (separatists). They have this kind of genuine internal thing going that has a huge disconnect from externals. It is far better, far more spontaneous, far more gracious, and it really feels good. They have so many good feelings.

Here's what they are: they are actors with little to no discernment. What they have sold themselves as spirituality is actually existentialism. Being conformed to the world and calling it spiritual is like buying the chihuahua and calling it Polo. At the point of justification by faith we become partakers of the Divine nature. That changes our outsides---we are transformed by the renewing of our minds. Sure, people can fake the standards, but the real frauds are the worldly professors of Christ who fill the worldly churches predominant today. Big bark; not much dog---kind of like, well, a chihuahua.

Posted by Kent Brandenburg at 10:59 AM

Zionita said...
This comment has been removed by a blog administrator.
12:53 PM

I agree with you about the need for standards. BUT, I think that it can be easy to put those standards on the same level as God given commands. Isn't it important to distinguish the difference between a personal stand or conviction and a God given command. In the church I am at we really do have what I would call right wing legalism going on. For example, the pastor was accused of being new evangelical for using a power point presentation in his message. There are many more examples but I don't want to rant about my brothers. I think sometimes we can put to much weight on our personal standards or preferences. I think you would agree this is wrong? Right. Bye the way I just thought of something. I am really enjoying these blogs, but I don't want to be antagonistic or argumentative. I hope Im not bothering you. Anyway, what does the verse mean that says we are to worship God in Spirit and in truth?

Great post! Standards are too often tossed aside by our "purpose-driven" American churchianity! I remember reading somewhere about a man in a church in the early days of the colonies. He voluntarily went before his local assembly and repented of having shot a deer and dressed it on the Lord's Day. He submitted himself for discipline as the church saw fit.

Can you imagine anyone in even our fundamental churches doing that today? How many professing Christians are out playing golf Sunday afternoon?

You don't come across argumentative. Even if so, no problem. I'm glad you care. You impress me as someone who thinks.

Interesting about the deer-hunter, Titus.

I've heard that statement made by your pastor said by others before. It could be true, depending on what kind of church it is. Our crowd is essentially the same, Sun AM, PM, and Wed. Our church, me, and God all popular to them. People won't even come Sunday morning if they reject Christ. To get me an email, click on my profile next to my picture on the right and on the profile is an email button.