Paul Bunyan in the Bible? 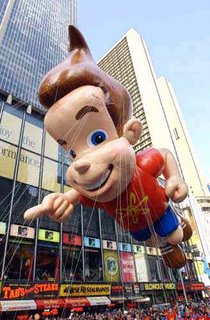 When I was kid, which wasn't that long go according to latest studies, I remember a folk song sung (not to be confused with Sing-Sing) with lyrics that started, "Daniel Boone Was a Man, Was a Big Man." You may remember the song if you were born in a log cabin like me. OK, so Daniel Boone was a big man. He must have been who Paul was talking about in Ephesians 5:23 when he wrote, "For the husband is the head of the wife, even as Christ is the head of the church: and he is the saviour of the body." He would have to be very big, at least as big as a Macy's Thanksgiving Day float, I've often thought, if he is "the husband." I mean, if "the church" later in the same verse is the universal church and "the body" is the universal body, then THE husband would have to be the universal husband and THE wife would have to be the universal wife. I have often wanted to see the universal husband. I wish they could tether him for a parade just once so that everyone could enjoy him. One time someone told me that "they knew the wife, but they couldn't remember the husband." I thought: What a special privilege even to know the wife in Ephesians 5:23 because I've never seen her. She must be big too. I wonder if she also has a big rolling pin?

I feel cheated. I wanted to go attend a universal and invisible Bible College. Drive an invisible universal assembled car, at least that would not need to be constantly repaired. Better yet, as an assistant pastor, I would love to take calls and council invisible and universal church members. Visit invisible people. I guess none of this could work. I better not live by feelings.

I think some confusion enters when we realize that in this illustration there's only one particular husband, but many particular wives. I see the point you're making, but it seems that the illustration does not give a complete picture of Christ and the church.

I'm going to comment on the three above comments all at once. Billy, deal with it, you can't go anywhere until you make calls riding Babe the Blue Ox. Caleb, the "benefit" of the universal church is that if this is the true church, then you can float around as a free agent without responsibility to the local church. You also can start a parachurch organization with no authority and call it a "ministry." And Pastor Voegtlin, I don't quite get your point actually. In v. 23 the wife is also a generic noun, not a particular. The husband is the head of the wife. Both are generic. The only non-generic in the verse is "Christ" because, of course, there is no generic Christ, since there is only one of Him. He could only be particular. Thanks for commenting.

I don't know that I was trying to make a point necessarily. It's just that I'm not ready to give up totally some of the ideas behind the "universal" church. Of course, I am against the aspects of it mentioned here, but it also seems like there is some type of relationship between believers, even if they are in different bodies (churches). And it seems that this bond exists because of our relationship to Christ, which is through the church. The other thing I was saying was, seems like a particular husband would have a particular wife (not a generic one), therefore some confusion (or debate, or something) because our particular Christ here, has a generic(?) wife.

But you did have me smiling with what you were saying. I was on the precipice of getting what you were saying. Christ doesn't have, well, a real wife as you know, even as the wife is an analogy for the church. A particular husband is the head of a particular wife. But Christ is the head of every church, therefore, He is the head of the church. The Scriptural relationship all believers have are these two: the family of God and the kingdom of God. Every child of God has a familial relationship and since each person born-again is part of the kingdom of God, he has a relationship as a fellow citizen of the kingdom. However, "church" and "body" are different. Those are not soteriological terms, but ecclesiological terms. A universal church would be an unassembled assembly, which is a contradiction in terms. I could say more, but hopefully that helped.

Yes, it did! Very much so. Thanks.

The issue of ecclesiology seems like it is going to be one of the next big battles in fundamentalism, as the local church struggles to loose itself from the mindset of the "universal church".

Wasn't the fundamentalist movement born out of "Protestantism"?

This sounds like you are commenting on my hamburger column above, although the last two do relate. Yes, technically to your question. It isn't homogenous by any means, with a wide variety of folks responding to liberalism. For a long time, I haven't seen myself as a fundamentalist, but a historic Baptist. God preserved His Word and His church, and we are part of that line that has always believed and practiced the Bible since the NT. Fundamentalism is another reform movement. I never bit on fundamentalism when offered because it looked unScriptural to me. When someone calls me a fundamentalist, usually I don't argue because I assume they mean separatist or a man for the old ways, etc., but in my head I say, "No, I'm not."

So...what do you make of Matthew 16:18, "And I say unto thee, That thou art Peter, and upon this rock I will build my church; and the gates of hell shall not prevail against it ."? Is that talking about the body of Christ as a whole, or is it also a general term for the local church?

I may be missing the point here, but, without a 'universal church' (to use the term used here), wouldn't Jesus be a polygamist?

You sound like my Pastor, is there an universal church or not?
Did Christ die for sinners, and my local church, or for ALL churches, can we be an assembly if we cannot all be assembled, makes my head spin.

Jesus died for everyone, so anything less than that, He also died for. He tasted death for every man.

Thanks for the question. The "local-only ecclesiology makes Jesus a polygamist" argument is pushing a metaphor way too far, and unless you affirm that Israel=church=all inhabitants in the New Jerusalem, you can't make the bride/wife metaphor refer only to a single entity.

I would commend to you the study of the word "church, ekklesia, here:

as if you want to get a handle of what the Bible teaches on the matter, looking up all the texts is a great way to go.