We Really Did Know 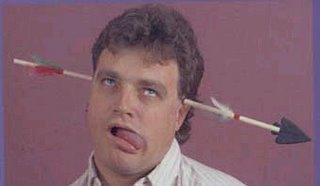 You've seen those fake arrows that are meant to fool no one. They are not supposed to look like they are really sticking through someone's head. They're a joke. We really do know that they are fake. There are a lot of things that we are actually able to know. When we don't, it is only us to blame.

Israel, the ten northern tribes, were doing things that would result in this: "Therefore the LORD shall set up the adversaries ... against him, and join his enemies together; ... and they shall devour Israel with open mouth. For all this his anger is not turned away, but his hand is stretched out still" (Isaiah 9:11, 12). Being devoured sounds pretty serious to me. God wants them devoured for something they have done. As you consider why, I want you to consider what in particular is wrong with what they were doing. The people of Israel were saying, "The bricks are fallen down, but we will build with hewn stones: the sycomores are cut down, but we will change them into cedars" (Isaiah 9:10). Alright, now tell me what verse says that rebuilding walls with hewn stones is a sin. Can't think of one? Thought so. What about the second? What verse of Scripture says that when sycomores are cut down, it is really bad to replant cedar trees? Can't think of one again? Thought so again. So what was wrong? If the Bible doesn't say something is wrong, does that mean that it won't be wrong? We see here that this is not so. It can be wrong. Rebuilding and replanting with superior rocks and trees are not the problem, but they are both indicators of self-sufficient pride, which is wrong.

People may say, "I didn't know that would be wrong to do." They knew. If they didn't know, they should have known. God doesn't devour people, and especially His own people, for doing things that they couldn't have known were right or wrong. People often argue that certain activities must be right because God doesn't expressly say anything against them. Much of what God prohibits, He expresses in the way of principle. He knows we can understand those principles and make decisions that will honor Him based upon them. When we don't follow the principles, and, therefore, disobey God, we won't be able to say that He didn't tell us it was wrong, because we really did know.
Posted by Kent Brandenburg at 9:20 PM