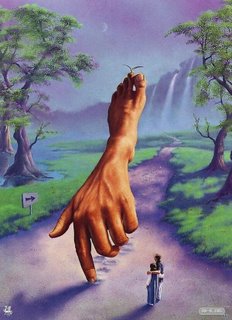 I hope you don't think it strange that this thought occurred to me: It is really strange when people stop thinking strange things are strange. A couple of years ago, I tried to do a nifty thing with a plane flight that made us transfer between airports in Washington, DC on their public rail, the metro. As a man, I liked making our gargantuan luggage look light, but my screaming arm muscles and growing arm pit stains were suggesting something different. I wedged into a car, standing room only, instantly met by several violations of my intimate zone. This only got worse until someone who looked like the chief of an African tribe was inches from my face. I didn't say "he," because I didn't know. I couldn't tell if this was a savage native or a post-modern androgyny. This "person" had what looked like "his" unique ceremonial headgear, some piercings, varied streaks of war paint on cheeks, nose, and forehead, and then something in the mouth that made the lips protrude eerily. That was strange to me. But like I said earlier, what was worse was that everyone just sort of ignored this like it was nothing new. He wasn't getting double takes or even a sophomoric snicker. Someone has said that culture is listening to the William Tell Overture without thinking of the lone ranger. Well, multicultural was standing next to this creature without a tremor from the strange-o-meter.

Have we lost strange? Zephaniah does say, "And it shall come to pass in the day of the LORD'S sacrifice, that I will punish the princes, and the king's children, and all such as are clothed with strange apparel" (1:8). You might say, "Strange means 'foreign' in that verse--foreign apparel; not strange like weird." But foreign was strange like weird to Judah wearing the style of clothes from the idolatrous other nations. When the Lord slew Judah like a sacrifice, He would punish the king's sons and those who wore foreign clothing. Wearing foreign garments expressed love and support for non-Israelite values and so incurred God's wrath. "Hey you with the Miami Vice jacket! Yes, you!" "Hey Mr. Tight Tee-shirt Who Thinks He Has Pipes!" "Hey you with the dippity-do!" "Hey Ms. Make-Up Looking Like She's In Dramatic Productions!" "Hey Mr. Casual, Mr. Inappropriate!" We are still supposed to dislike certain styles of clothing, the ones that express comraderie with the world in its philosophy, priorities, and interests. I am glad that I continue thinking strange is strange, that this flame of Godly order hasn't extinguished with me. And after all, to God strange is still strange.
Posted by Kent Brandenburg at 10:31 PM