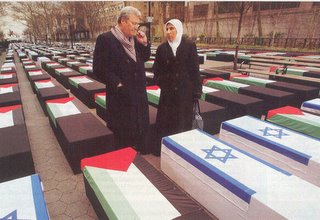 In a recent interview about his film about the tragic terrorist murder of Israeli athletes during the 72 Munich Olympics, Steven Spielberg says, "It saddens me to see how narrow-minded and dogmatic some of the right-wing fundamentalists here in the USA are. . . .I do not claim to be providing a peace plan for the Middle East with my film. But is that a reason to leave it all to the great simplifiers? Jewish extremists and Palestinian extremists who to this day regard any form of negotiated solution in the Middle East as some kind of betrayal?" Is it possible he's right, that the best path for peace between Palistinian Jews and Arabs would be at negotiating table? Is there no dogmatic solution?

Liberal Jews (and all other liberals) don't accept Scripture, including the Old Testament, literally, that is, grammatically and historically. Since they reject Scripture, except as some kind of allegorical moral self-help book, they make decisions based on pragmatic and subjective human reasoning, not rooted in any objective truth. Because of this, they think that all sorts of behavior should be justified and tolerated. This leads to this search to understand the possible justification of an act of terrorism, leading to a kind of moral equivalence between the murdered and the murderers.

Joshua, Saul, David, and Solomon, for instance, could and did know that God wanted them to expel all the Canaanites from the land, primarily through military conquest. By the time that era of Palestinian history was complete, instead of doing what God said, Israel attempted to do exactly what modern day Israel is trying to do, live together in harmony with diverse cultures, relinquishing the purity that God demanded, as well as His protection. Peace comes from agreement upon and the enforcement of God's revealed Truth. If God wishes Israel to take and keep all the land and expel everyone else, then that is the way of peace. Because the Arab side says that they deserve the land, or part of it, doesn't mean they do. If Israel is supposed to have and keep it all, then she should, even if it means ejecting anyone from her land that doesn't agree. Someone may call that extremist, but that doesn't make it so.

This last week, Oprah used an entire show to slam an author she had recommended for her book club for making up (lying about) major features of his non-fiction self-help book. What does it matter whether one needs to take it literally as long as it helps people? And what is the truth? Can anyone really decide that? Oprah says her standard is truth, so she was betrayed by this author. Is Oprah an extremist? Since truth is relative to what works, shouldn't we just say that this author told the truth to the people he helped? The truth about God and God's Truth about everything, the Bible, is even more important. If believing it and practicing it makes someone an extremist in the temporal world, but a victor with God and in eternity, then so be it.
Posted by Kent Brandenburg at 9:16 PM

Are you saying that the Israli nation today should expel all Palestinians in order to live "biblically?" If Israel became a "Christian" nation, should they deport all Canaanites, etc.? That does seem extreme. But if it is biblical, I guess it is right. So how do we know that that is what is biblical today? (Remembering the Time and Place post)

I wasn't too specific with the application, because the details can become difficult. Did I say something about time and place? That was just a blog. Yes, I believe what I say, but I'm thinking of it in a different way for modern Israel, because obviously they are not a theocratic nation any longer. We don't have the pre-context of Israel in play now, them being theocratic, but do have a post-context about time and place in that Israel could make a decision based on what they read in the book of Revelation. They are, you know, responsible for that book. They could determine that they are a nation God will deal with in the future, so they should protect their nation status. Israel is one of those commonalities to every dispensation--we all know that God is still going to deal with them, so we support their existence.

However, removing the Israel part of the understanding and just looking at teaching that would relate to separation, they should protect a common and superior culture. Israel should evict all those who are not willing to integrate in their society. I think the same way about this country. People do not get to oppose the country to the point where they become a threat to our constitutional way of life. We are a melting pot, not a salad bowl. These things were put for our example; therefore, let's follow the example of national separation that God taught to Israel. Empires in part fall because they don't follow the same principles that would have protected Israel from falling. The Arabs in the land don't care to see Israel continue and I think they should thoroughly expunge themselves of all those who are not supportive. And, of course, last time I checked, Palestinian Arabs are not God's chosen people.

I have also understood God's law to be righteous, so if they come together on a Judeo ethic at least, that would reflect right national law. I think the same thing for our country, that we should support some fleshing out of the ten commmandments. We should reject certain cultures and protect one culture that we agree reflects at least a Judeo-Christian ethic upon which the country is founded.

Mr. Brandenburg said: "And what is the truth? Can anyone really decide that?... Since truth is relative to what works...The truth about God and God's Truth about everything, the Bible, is even more important. If believing it and practicing it makes someone an extremist in the temporal world, but a victor with God and in eternity, then so be it."

Examine your statement. It makes no sense. First, you state that, "Can anyone...decide that?" And then, "...truth is relative to what works." Of course one can know a truth. The truth is the sun rises and sets, a truth is that we are born, live and die, the truth is that the United States was a combatant in World War II, the truth is that murder is immoral, etc. Tell me what "...truth is relative to what works" means to you. What works? Define that. If brutal dictatorship 'works' for a country, are you saying it is a truth? And if it is, what does that mean? Does 'what works' equal 'truth'? What in the world are you talking about?

The strange tautology "The truth about God and God's Truth about everything,
the Bible...", has no meaning: no meaning in logic, cognition, nor in fact. It is acknowledged by writers in both the Old Testament and New Testament, that the words were written by men, or men re-counting the word's and/or actions of Christ [in the New Testament]. Whether or not Christ's words are God's is a matter of faith. Until you can differentiate "truth" from your faith and what you believe, not empirically but through your religious beliefs, you delude yourself. They are not one and the same. To say "God's truth about everything" is contained in the Bible, is to underestimate God, to not understand the omnipotence of God and is not the act of a person of faith, but rather the words of a pompous and delusional man.

Finally, if you believe that we cannot know the "truth," can we at least know what a lie is?

I suggest you read the book, "Lying," by Sissela Bok.

Thanks for commenting fearless, and might I say that you comment fearlessly. I'm afraid (fearful of sorts) that you missed something very integral to understanding that last paragraph in my post that I think you should have understood in light of the rest of the blog, which is that I was being sarcastic with that series of questions. It was a rhetorical device intended to make a stronger point; however, with you, it quite fell to the ground---that sometimes happens when someone goes off course because of very subjective reasoning. Of course, James Frey was lying in his book. The truth should be important for more than just a volume from Oprah's book club. Your lack of understanding the figures of speech, i.e., sarcasm, rhetorical question, led to your blowing the first two paragraphs of your comments. You quite honestly didn't show very much sophistication not to pick up on that.

When you missed that, you couldn't help but go down hill, fearless. You also show very little knowledge about the Bible. You say, "The sun rises and sets." That truth is found in the Bible in the book of Ecclesiastes and Lamentations. However, does it really rise and set? Isn't the earth just rotating on its axis? Yes, from our perspective it rises and sets, which is a fine poetic description, but, yes, a figure of speech. The sun doesn't actually rise and set.

Why is "murder is immoral" a truth? What makes that a truth? This is where you fall short again. God said murder is immoral in Genesis 9, and that's why it is immoral. Stalin didn't think it was immoral. I say that the Bible is God's truth about everything because that is what the Bible says (see John 17:17; Psalm 19:7-11; 2 Timothy 3:16, 17). That should change your comments about my pompousness and delusions. The Bible wasn't just written by men. It couldn't have been because the Bible is 40% prophecy, and thousands or prophecies, made even hundreds of years before their fulfillment, have been fulfilled, validating the Bible as truth as much as we "are born, live, and die." Truth, faith, and belief are all inexorably tied together (Hebrews 11:1-3).

Next time perhaps you can come to me with some of your facts sorted out, but in the meantime you should think about what I've written. Even better, pick up a Bible and read it from cover to cover. Find out for yourself instead of believing someone else's propaganda.