The King James Bible: Too Hard to Understand?

"The King James Version is too hard for people to understand!  It is written in Old English.  Therefore, we need to use a modern Bible version that is easier to understand." 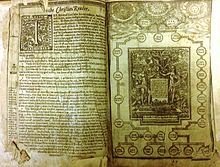 Before dealing with the most important question--what Scripture says on the subject--a few brief words on a secondary but related question.

The King James Version: Is it Old English?

First, the King James Version is not in Old English.  Old English is the language of Beowulf.  If you want to hear Old English, watch this:

Is the King James Bible easier to understand than that?

Maybe the King James is Middle English if it isn't Old English.  Here is someone reading from Chaucer's Canterbury Tales, which was written in Middle English:

Here you can probably make out something here and there, but it is clear that the King James Version is not in Old English, nor is it in Middle English.  It is much easier to read than the Canterbury Tales.  (Side note: I enjoyed my college class on Chaucer's classic at U. C. Berkeley.)  The King James Bible is in early modern English.  English has changed less between 1611 and today than it did from the days of Chaucer in the 1400s to the KJV.

So the King James Bible is not in Old English, nor in Middle English, but in modern English--early modern English.  That does not mean, however, that it is necessarily easy to understand.  Perhaps it really is "too hard," and we should overlook the fact that the New King James Version is soft on sodomy, removes "hell" from 22 verses in the Bible, replacing it with easier words to understand, and ones that are in common use, like "Sheol" and "Hades" (2 Samuel 22:6; Psalm 18:5; Matthew 11:23, etc.), is not actually translated from the same underlying language text, and contains other problems.  Maybe since the King James Bible is "too hard" to understand we need to just deal with these sorts of problems in the NKJV.

Biblically, what does it mean that language is "too hard" to understand?  In the New Testament, the Greek of the book of Hebrews is much harder to read than the Greek of the Gospel of John.  The Gospel of Luke and Acts are harder to read than 1 John.  Sometimes the New Testament contains really long sentences, like Ephesians 1:3-14, which is all just one sentence in Greek.  Why did the Holy Ghost dictate such long sentences?  Wouldn't they be too hard to understand?

The vast majority of people in the first century were simple rural people; farmers, shepherds, and the like, not highly educated urbanites. Literacy was sketchy in many places.  What was Paul doing when he wrote Hebrews under the inspiration of the Holy Spirit?  What was Luke thinking?  Didn't they know that their Greek would be too hard to understand?

What about the Old Testament?  Significant portions of the Hebrew prophetic and poetical books are much more challenging Hebrew than many of the narrative sections of the Hebrew Bible.  Why did the Holy Spirit write hard Hebrew and hard Greek in some parts of the Bible?  Shouldn't it all have been easy to understand?

Is there more literacy in the English speaking world now than there was in the first century world of the New Testament, or in the world where God gave the Hebrew Old Testament?  When was learning to read--or improving one's reading level--easier?  Surely now.

The question, then, should be:  "Is the English of the King James Version significantly more complex and harder to understand English than the Greek of the New Testament was to the New Testament people of God or the Hebrew of the Old Testament was to Israel"?  The King James seeks to replicate the syntax of the original language texts as much as possible.  That is why every verse from Genesis 1:3 to Genesis 1:26 begins with the word "And"--we may not write that way in non-translation English, but the KJV accurately represents what the Hebrew given by the Holy Spirit says here.  We can't simplify the syntax of the King James Bible without moving it further away from the original language text.  If we have to leave the syntax alone, does the King James Version have more archaic words than the Greek of the New Testament or the Hebrew of the Old Testament? There are over 680 hapax legomena or words that occur only one time in the Greek New Testament and close to 1,500 hapax legomena in the Hebrew Old Testament. While not all of those hapaxes would have been rare or archaic words to first century readers, many of them would have been.  By way of contrast, there are nowhere near that many archaic words in the King James Version.

Evaluated by the standard of Scripture itself--by the standard of the Greek and Hebrew text God gave to His people--the English of the Authorized, King James Version is indubitably not "too hard."  People who claim that it is too difficult to read should be enthusiastically promoting the Defined King James Bible, which leaves the actual King James Version text unchanged but defines the few archaic words at the bottom of its pages for readers, or works such as David Cloud's Way of Life Encylopedia of the Bible and Christianity, where all the rare KJV words are defined, instead of encouraging readers to reject the  KJB's fantastic translation of the perfectly preserved Hebrew and Greek Textus Receptus for corrupt modern Bible versions.

So is the King James Bible too hard to understand?  If we employ the only objective standard--Scripture itself--the answer is "no."

Of course, the "too hard to read" line is being used as a chaser for hooking people on the corrupt modern versions without telling them of those "other changes." That's the main problem.

It just so happens that even that reasoning is weak. People with weak reading comprehension will have just as much trouble with other translations that aren't written like Dr. Seuss. Do we really seriously want our translations written like that? No, the "difficulty reading the KJV" thing is just a chaser for hooking people on the corrupt modern versions, versions that were made and designed that don't condemn their sin.

People who have trouble reading should have a drive to become more educated. Have some agency. Learn new things. If you can't do that, you have bigger problems and a modern version isn't going to fix that for you. This is of course just an excuse to hide from the light of God's word (John 3:19-20)

Thanks Andrew. Brother Cloud, this article is written by Thomas Ross, just for information, but thank you.

Sorry, that post from me was not nearly as well written as the KJV is. I was on my phone so I didn't have a chance to re-review it. Hopefully my point was at least salvageable here

I agree that the “too hard to read” is very often an excuse. There are some people, however, who really think this is the reason to scrap the KJV. I believe defining Scripturally what “too hard” means is important.

I also think it is noteworthy that the Gospel of John, which is written to show the lost how to have eternal life as at least one of its main purposes (John 20:28-31), has some of the simplest Greek in the NT. That is a basis for making evangelistic works, gospel tracts and booklets, etc. in simple English.

Thanks for the comment. Posts at “What is Truth?”;with a TDR at the end are written by me, as Pastor Brandenburg points out in his comment above.