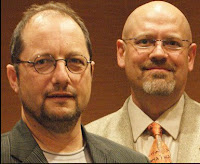 I had read about this and was interested in listening if they recorded it, but James White and Bart Ehrman debated on January 21 this year on the resolution, "Did the New Testament Misquote Jesus?" This is a take-off of Ehrman's NY Times bestseller, Misquoting Jesus, which is essentially textual criticism for dummies. Ehrman's a former skeptic, now agnostic, and his new life's mission is to help everyone get there with him. Because he's not a believer, he gets to be the head of the religion department at UNC, Chapel Hill. James White hasn't done much to defend the Bible against the skeptic. He's mainly attempted to give more uncertainty to people without a doubt in Scripture. However, White would profess Jesus Christ and defend Christianity. Ehrman would attempt to tear it down. Ehrman is so popular, I'm sure, because he attacks Scripture and does so on a fifth grade level. He understands his audience. Ehrman studied under Metzger to get his position. White reads Metzger to get his position.

I've downloaded the audio for $6 over at White's Alpha-Omega ministry site and I listened to the introduction and Ehrman's opening statement. I'm interested in listening to all of it as I make the time. And I will write about it here. You'll read an interesting review of the debate at The American Vision by Joel McDurmon. He would be friendly to James White, but his review calls it a draw---neither of them won the debate. And that despite evidence that Ehrman did nothing to prepare for it, but White spent a large amount of time.

That's all I have to say for now, but I'm planning, Lord-willing, on breaking it down for you in the near future, so stay tuned. Read the McDurmon article and see how familiar his conclusion sounds. White says that the best thing that comes out of this debate is that Ehrman is exposed as the skeptic that he is. Well, did anyone really doubt the skepticism of Ehrman? That wasn't much of a goal reached if I put the effort White did for this debate. I'm thinking that the best material that I'll get out of this debate will be the content in opposition to White. I already knew that Ehrman was a fraud, having read two of his books. Now we'll see about White.
Posted by Kent Brandenburg at 7:11 PM

I look forward to reading your comments about the debate.

I've listened to the intro, both opening statements, then Ehrman's first rebuttal. That's about half way. Thanks Terry.

The reason Dr. White exposes Ehrman as a skeptic is to dispel the notion that Ehrman's studies are an objective analysis of textual transmission that can only lead the conclusion that the Bible 'misquotes' Jesus. That has been Ehrman's campaign in the media and it is evident in his books. Those who follow him believe he's done the work to prove such a thing. What White demonstrated during the debate (as well as before and after it) is that Ehrman is just hyper-skeptic, and following his own logic one could not even know what was said by Mohammed or Tacitus. I thought White did a decent job revealing that textual variants does not negate the authenticity of a document.

What kind of a blogger would review a debate he has not heard? Probably the same kind of blogger who would believe that the KJV is inspired and inerrant.

Wow Anonymous. I hadn't reviewed it yet. I review only the comments. And notice that when I do, I put my name on it every time. Unlike you, won't say boo to a goose, milquetoast, pink lemonade. Oh, and my position is that the Greek and Hebrew text is inerrant. And inspiration is technically reserved for the originals, but derivatively for copies and translations. That is an application of, um, Scripture (read 2 Timothy 3:16).

Alan Kurschner at aomin.org has noted a "few" problematic areas in your blog entry that you may wish to look into: http://aomin.org/aoblog/index.php?itemid=3109

Thanks for the heads up, but I had already read Alan's rant. I comment to it under my next post in the comment section. He's not very careful with what I wrote or what I believe. I'm finding this characteristic of the AO crowd. Again, thanks.

If you find that most of the "AO crowd" is misrepresenting your position then perhaps you might want to take the inimitable James White to task tomorrow on his radio program. Here is the time and phone number: Thursday 4:00 MST 1-877-753-3341 (Toll Free).

Thanks for the concern. I'd be glad to talk to James White, even in public, but I wouldn't do that without rules of engagement. I listened to his time with McDurmon and it sounded like a breathless monologue coming from White. That wouldn't accomplish much. What he should have is a comment section on his blog. That way I could at least clear it up without having to wait through the long speeches by White.

I'm sure White would hear you out w/o out the garrulous commentary if you phoned in tomorrow... ;D

OR you can shoot him or Alan an e-mail...

Ehrman is a "fraud"? Just because he doesn't believe in the supernatural? Or because he attempts to communicate rational thought to a targeted demographic?

Your comments on Ehrman are flat out lies.

Ehrman was an evangelical Christian who after learning Greek, Hebrew and Latin studied the ancient biblical manuscripts and found that there is NO WAY the Bible is inerrant he went from evangelical christian to a liberal christian and stayed that way for about 20 years until he became agnostic. If you actually read his books and his interviews you would know he is NOT trying to convert people into agnostics or atheist. He is extremely respectful to religion and religious people.

Mr. Anonymous comes in to make an accusation. Mr. Coward. Read the introduction to Misquoting Jesus. Also read the Bible. You also don't know how the men in his business define inerrancy. So your accusation rings empty.

Inerrancy according to all evangelical textual critics applies to the originals. He claims not to move people away from Christianity, but it is obvious that he is. He doesn't have a doctorate in philosophy or theology and yet he writes books recently on suffering? He's going out of his way to turn people. He's not a threat to a real Christian. A real Christian doesn't apostatize, which means, if you did know the Bible, that Ehrman was never a Christian. He is inconsistent in his application of his textual evidence. The Bible has more evidence than any and yet Ehrman believes that many other ancient texts were preserved. He comes to different conclusions based upon his own presuppositions. So you can sit back down now, Mr. Anonymous.

Kent,
You claim the originals are inerrant? When and where did you see them to confirm this? I am very interested in seeing them myself. I am sure you are not claiming to know something about documents that you have not seen. That, of course, would be absurd.

There is absolutely nothing absurd about believing that a God who cannot lie gave revelation that contains no errors/lies. God does not have to perpetually perform a miracle to keep normal processes of decay from taking place on the original parchment to prevent such a belief from being absurd. You will have to do better than this to refute Christianity. Thanks.

Thanks KJB1611 but I never claimed to be trying to refute Christianity. I merely asked how one could claim that the original autographs are inerrant when no one extant has ever seen these documents. You're claiming to have knowledge of documents you have never seen! Your belief that God cannot lie is based in the revelatory text of the Bible. Your belief that the bible is inerrant is based in your belief that God cannot lie. Classic circular reasoning, as I have pointed out before.
As of yet, no one has shown me a copy of the originals, yet they claim to "know" they were inerrant. Sorry but you are expressing a position of faith, not a position of knowledge.