Where is the Bible? Part Two: Answering the Questions 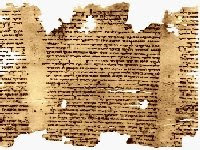 Canonicity is a good test case for MVO or Critical Text people. In a very transparent way, it shows the double standard they have for the doctrine of preservation. We have a far more developed doctrine of preservation in Scripture than a doctrine of canonicity. Most defense of canonicity comes from the patristics and their councils. They are quite unwilling to add or take away one book from the 27 when there is compatible “evidence” and “history” to add or take away one or more books. No passage says there are 27, so they practice fideism regarding their very limited doctrine of canoncity, a “leap in the dark.” When the dust settles, they use the exact same argument for the preservation of books as we do for words, when there is actually nothing in Scripture to defend their preservation of books. Scripture only teaches preservation of words.

Is there any passage in Scripture that lists the twenty-seven books of the New Testament?

NO. There is no passage that says that the TR is what God would preserve. That’s a big argument on the MVO side. That get’s a big ouch here. Sheer fideism on their part. Or is it? Aren’t we to get Biblical presuppositions and then look for their fulfillment? That’s what we do in the matter of preservation. That’s what we both do in the matter of canonization. This should shut down this argument.

How can anyone be sure that the original New Testament did have twenty-seven books?

They can be sure by faith. They can be sure that it is exactly, perfectly, accurately 27 by faith. Is it just that God gets to do an easier miracle that we believe in 66 books of the Bible? But we can’t believe in a miracle that we have every Word for us in one edition of the Hebrew and Greek OT and NT? And this is even though the Bible actually says something about preserving Words and nothing about Books. Our faith is in the Holy Spirit through the pillar and ground of the truth. Jesus said He would be with His church.

Does the Bible even teach canonicity of books?

Not once. So why do we believe it? The clear teaching is canonicity of Words. God keeps preserving, that’s the nature of preservation. Inspiration is a one time event. Preservation is an ongoing process. God guides into all truth through His Spirit. Can we trust the Holy Spirit? Or is our latest trust “guidelines of textual criticism?” I think it is interesting that anyone would place strong trust in Irenaeus, who was obviously a baptismal regenerationist. They gladly do, bowing at the altar of scholarship. His reasoning behind four gospels would be considered a joke if it was brought up today by a KJV supporter.

Why did canonization take so long?

God’s ways are not my ways. We wait on Him, not He on us. We also are depending on “history” and “evidence” to say it took long. We don’t know that it may have been much shorter, like 50-100 years, or the number of years that it took for the Holy Spirit to guide the church into the exact Words of Scripture from those copies and editions.

Do you believe that God used these three discoveries of texts recounted above in order to restore the New Testament back to a condition closer to the original manuscripts?

No way. I think they are all three Satanic. They are a trap for those who do not “receive Scripture.” Tischendorf was determined to restore Scripture, not receive it. He thought too highly of himself. If we are going to accept an old minority manuscript that is missing the first verses of John 8, but has the Epistle of Barnabas, then why not accept the Nag Hammadi Gospel of Thomas. It’s old and minority. There are those that put it on par with John’s Gospel. When we start depending on extra-Scriptural methodology and not Divinely established principles from Scripture, we are open to anything and everything and are left with nothing perfect. And sadly, it doesn’t even matter.

How could we possibly have a perfect Bible when no two hand-written ancient copies are alike?

I will answer this in a later entry on one of my Wednesdays.

How does anyone know what the Word of God actually is?

By faith with Scriptural presuppositions.

Is canonization a natural process?

No. It is a miracle. Oops. Providence is a miracle? That’s what Henry Morris said in his book on miracles. He had a whole chapter on it. The foreword was written by John MacArthur, endorsing it. Of course, I believed that already, but now maybe others will because their man MacArthur liked it.

Is having errors in the Bible a suitable position for you?

No way. If there is anything that the Bible teaches about itself is that it is perfect.

Do you believe God preserved Words or the Content of Scripture?

The Bible teaches preserved letters and Words, not content. Those who believe “content” are espousing a neo-orthodox position.

I wasn’t really laying a trap, but just recognized the trap because of the double standard, two faced Bibliology. I would hate being in their position; it isn’t exegetical. It is evidentiary, historical-rationale apologetics. It isn’t pleasing to God; it isn’t faith. And then it leaves them adding and taking away from the Words of God.
Posted by Kent Brandenburg at 1:17 PM

Does the Bible even teach canonicity of books?

I would think, some. For example, Jesus Christ validated Moses and the Prophets (Mark 7:10-13, Luke 24:27). There are other examples of inter-Biblical testimony regarding this matter. Is this correct or is this missing the point of your question.

Kent,
I find your writing to be interesting, but as I have said before, a bit biased. I often feel that you tend to expound on other peoples writings most usually in the tone of "this is what is wrong". I would never match words or debate with you as I know your "kill " list is teriffic, all be it a bit one sided. If I din't know you personally (from afar) I might even think you enjoy that "Lead them in and go for the kill" strategy.
Regardless, your hammering of John McArthur is interesting. It does remind me of the Hindenburg story.. If it goes up it WILL come down.

Be Blessed of the Spirit