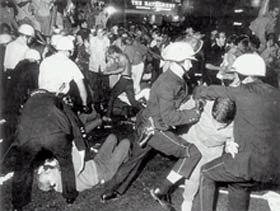 I was talking to a man who has children in our church school. Before his children were enrolled in a school in close proximity to us in our town here. That school had a huge poster in the lobby of their gymnasium with the giant words "Question Authority." He confronted the administration about that banner. He believed that the message would harm his relationship with his own children, that instead of immediately obeying, they would question his authority. This was not a lesson he wanted them to learn, so he questioned school authority about it. He found out that the "question authority" theme was not universal. Ironically, it did not apply to questioning them about putting up such a message in the lobby of their school.

Does the Bible teach "question authority?" Certainly the Bible teaches to ask questions. 1 Corinthians 14 says that the spirits of the prophets are subject to the prophets. Acts 17 informs that the Bereans searched the Scriptures to see if the things they were taught were legitimate. 1 John 4 tells us to test the spirits to see if they are of God. 1 Thessalonians 5 mandates that we prove all things. However, the Bible doesn't teach the messge of "question authority. Romans 13 says that all authority comes from God and that our responsibility to authority is to submit to it.

"Question authority" is a popular theme in the San Francisco Bay Area where I live. Even some Christian parents would applaud such a message decorating the lobby of a Christian school. They perhaps come from the hippie generation of the 1960s where protesting was an important school activity. With this philosophy so popular, the administration might think this could make their school more popular too. They might attract the crowd who wants a less rebellious school than the public school. Question authority is OK, but harm authority isn't. They want a school where the teachers are only safe from physical rebellion but not verbal rebellion.

If I had my kids in a school where they would need to "question authority," I would look for another school. I don't want my children in a school where I am concerned about the content taught in the classroom. That is why they don't attend the public school. These young people don't have the discernment yet to sift through the teaching for truthfulness. I want to know they will be taught the truth, and if something isn't the truth, I will be the one to correct it. I don't want my children thinking that it is permissible to question authority. I want them to respect their teachers and their parents, because this is the will of God.

Posted by Kent Brandenburg at 9:16 PM

Its hard to beleive that an authority would tell students to question authority. It seems ignorant at best.

I'm afraid I have to disagree with you. Our country was founded by people who were questioning authority. You go back through the history of our country and the lesson you learn is that authority, unchecked, will be corrupt.

The idea behind this statement is that just because someone is the authority, doesn't mean they are necessarily right, or following God's law. A blanket statement to "question authority" may not be appropriate in a school setting, but I can see the broader truth behind it.

Rachman, did you look at Romans 13? If you respect Scripture and you look at the first few verses, I think you would see it that way. Thanks.

Pastor Brandenburg,
So you're telling me that it's not ok to question the authority who made it legal to have abortions? If the Congress passed a law making it illegal for Churchs to display the Cross on their buildings, would you question that authority? Just trying to understand your blanket acceptance of human authority.
Respectfully,
RM

Paul was killed by the Roman government, and he wrote Romans 13. Of course, we obey God rather than man (Acts 5:29). I don't want to give too much on this issue, in an era in which personal preference trumps authority.

By the way, Acts 4:19, 20, our church memory verses, are very good as a balance for this subject as well.

Over the last six months I've been thinking about the ramifications of really thinking properly about authorities. I wonder if my patriotic instinct to cheer the revolutions that have happened in the former Soviet Bloc in the last couple decades is really unbiblical. On the one hand I'm thrilled for the freedom from oppression these people gain, but can I really condone rebelling against a God-ordained authority?

"If you wish to know what a man is, place him in authority"
Yugoslav Proverb

MICHAEL...."Freedom is not worth having if it does connate freedom to err."
Mahatma Gandhi

Pastor B..." We cannot live by power, and a culture that seeks to live by it becomes brutal anbd sterile. But,we can die without it". Max Lerner

While I find your most recent blog extremely and timely as well as interesting,however a bit contradictory, I can also see the reasoning to the issue. The statement "question authority" seems a bit overdone. Many people in authority need to be questioned. They are not all good, God fearing, Bible reading Christians. Agreed that raising your children to know what is right and wrong is well taken, there is always that "peer pressure" and not always from your own group. The issue of " to do or not to do" totally depends upon the question of dependability by the authority. I still question authority and school passed me long ago. We do our best to teach our children all the good "do and do not"of living. But, unfortunately the real world is still out there.
I believe in the verse in Proverbs..."Train up a child in the way he should go".....And, I must tell you..
We find that to be so true, up here..on

I appreciate everyone's participation. I would even give everyone a blue ribbion instead of the normal yellow or green. I have a difficult time, truly, with the "question authority" credo, in light of Romans 13 where we are to submit to authority. There is a hiearchy of authority, no doubt. If it means disobeying God, we do not obey authority. However, the general attitude of the God-fearing person is submission to authority---is this some kind of zombie-like, non-thinking? No.

So Rachman, I understand what you've said. You may even have better knowledge than I on the history of "question authority." Certainly, Germany should have questioned Hitler. My standard, however, again, is not to question authority unless it involves some disobedience to God, not my personal preference.

And Ruth...welcome back. Glad you are up and around again.

And ILA, nice quotes. You seem to be full of quotes. Are these right off the top of your head?

Michael C. Interesting thoughts. I believe that citizens should stop injustice in a free society in the way designed, that is, through legislation, etc. If that doesn't happen, someone revolution may be necessary, and I believe we can see this in many OT examples.

Pastor B
Just wondering what happened to my comment?

I don't remember getting one on this thread, but feel free to repost.

"The greatest form of flattery is imitation"...P.T.Barnum

I feel the same is true with quotating great people. Thanks for the blue ribbon...my favorite color..although green or yellow is fine.

I leave you with this bit of flattery I heard or read once.I am truly not sure.

K. Brandenburg "Sermon of 2004"
Title "Where is your priority"

At this moment I am in the Army and one thing that the Drill Sergeant teaches us is that there is only "ONE WAY COMUNICATION" that means what he says happens and there is no questioning or even arguing about it (if you do, then you are looking for trouble; what is call a "shark attack" of Drill Sergeants right in your face and etc).
It is interesting also to see in the gospels how the religious leaders questioned the authority that our Lord Jesus Christ had. I wonder in my mind the following: why were they questioning His authority? Might this be the same reason for those that like to question authority?